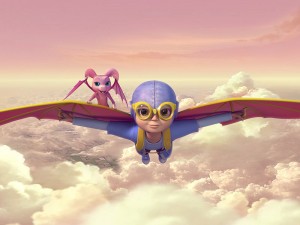 In my last post (that was over a year ago!) I wrote that I would be switching gears to review “non-iOS non-kids non-learning games”. Well, sometimes life has things in store for us beyond what we plan. Instead of playing non-kids games, I went to work for Kidaptive who develops Leo’s Pad iPad appisodes for preschoolers. I had a fabulous time doing production and design work with Leo (the fictional character inspired by Leonardo DaVinci) and the Kidaptive crew. I left Kidaptive realizing how important characters and story are to children’s educational content, and also to me as a designer. 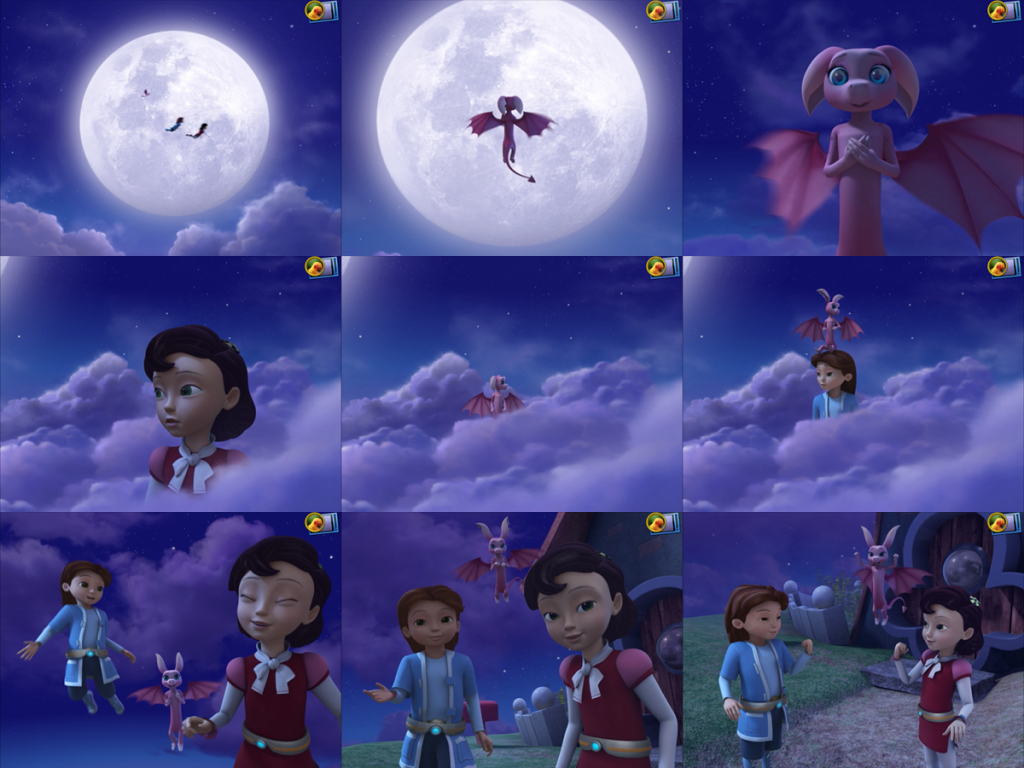 These nine shots are from my favorite cinematic sequence in Leo’s Pad. The scene is whimsical, the colors
are vivid, the accompanying song is delightful, and the characters’ emotions shine. Characters shown are
Leo, Marie (after Marie Curie), and the childlike sidekick dragon named Cinder. This sequence is part of
Appisode 3.

Before Kidaptive, I largely designed games where the mechanics drove the story. I took a Miyamoto approach where gameplay was “less about the story and more about the structure of the gameplay and what makes sense to be presenting to the consumer” (quote reference here). For example, when I was at Will Wright’s Stupid Fun Club, I was always asking myself ways (natural or crazy – it was the Stupid Fun Club:) to explain how a character got herself into a particular situation. Whatever I needed I could do, even if it meant the story was about a UFO abducting a Sim and turning her into a playing card to correspond with the mechanic.

At Kidaptive, the characters and world were already established before I arrived. I was forced to ask myself what the characters in each appisode were learning, discovering, and feeling.  With Leo’s Pad, I couldn’t come up with just anything that suited the mechanic since that kind of thing didn’t jibe with an early learning curriculum (or our creative director!).  And this restriction turned out to be a great thing!  It forced me to design more towards the player’s needs, to change mechanics, and to think differently.  Design became less about me and my own perspective, and more about what was best for the player.

Along with the narrative, Leo’s Pad is also guided by over 70 learning dimensions from Kidaptive’s curriculum. The goal is for the child to be ready for Kindergarten upon completing a series of appisodes (say 26). My favorite thing about Leo’s Pad is how diverse the curriculum is. In addition to standard lessons that most apps teach such as shape, numbers, and colors, Kidaptive’s curriculum includes cognitive areas such as delayed gratification, executive functions, and growth mindset. These areas really give Leo’s Pad games depth and variety that I haven’t seen in other apps for kids.

Adding these restrictions of characters, story, learning dimensions, and parents to the standard constraints of resources, time, money, and being a start-up, you can start to understand that the production of Leo’s Pad is quite involved. Add to that, the computer graphics work is done in India by Kidaptive CEO’s former company Prana Studios (Kidaptive is based in Palo Alto, CA). With all of these stakeholders and needs to be met, I am proud of what the team I worked with accomplished.

I learned a tremendous amount from Kidaptive, and after all, that is what they’re all about! I was reminded that anytime you put the player’s needs before your own, good things will happen. It’s easy to lose sight of the user, we’ve all done it. It’s too often that I have taken part in, observed, and read about a company’s focus getting shifted from the user to the technology, money, investors, people problems, designers, fame, and ego to name a few. We have to remember to bring focus back to the user, this reminder isn’t directed at Kidaptive, if anything it’s a reminder to myself. This topic deserves a whole blog post on its own, or maybe an entire blog? Perhaps tinamakesgames.com? Stay tuned!