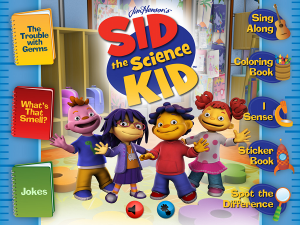 I’m back! SIGGRAPH and summer travel kept me away from playing games. After this post I’m going to switch gears and start reviewing some non-iOS non-kids non-learning games. But, before changing things up I wanted to review Sid Read & Play because it was recently released and I wanted to see if there were any differences between it and the older iPad learning games I’ve been playing.

Unfortunately, the only activity in the app that was new to me was I Sense. All of the other activities are familiar, including ebooks, jokes, coloring book, sing along, sticker book, and spot the difference game. Overall, Sid Read & Play does a great job of interweaving these activities with Sid’s objective to get kids excited about science, but I was hoping for activities that challenged kids to think in terms of experimentation, the scientific method, and exploration a bit more.

The app’s activities include jokes, coloring book, and sing along. While these activities may excite children
about Sid the Science Kid, I was hoping that they would excite children to think like Sid in terms of
questioning, observing, experimenting, and learning about the scientific world.

I will point out that my views of this app may be somewhat skewed because I was play testing it with users on the outer range of the intended target audience. I had a few six-year-olds play Sid Read & Play. And while they thought the app was “cute”, they also thought it was “too easy” and “for little kids”. Instead, they wanted to play with a photo app where you can decorate your picture (I had no idea how much kids like these photo editing apps).

The kids’ reactions to Sid Read & Play reminded me of a user test I did with another six-year-old who played with VTech’s newest learning system Brilliant Creations Vtech Color Touch Tablet targeted toward kids ages four to seven. After playing with the system for 30 minutes my user proclaimed that she would “like it if it were smarter”. Then she asked if she could play a Nintendo DS.

I’m going on a bit of a tangent here for a few paragraphs (so if you only want the Sid review skip down 3 paragraphs), but I think it’s important that STEM related games are able to reach six-year-olds such as the ones I was working with. I understand that it’s difficult to create an app that appeals to both four-year-olds and six-year-olds, but I hope designers don’t let that deter them from trying. For example, in I Sense, where the user chooses one out of six objects that “feels smooth”, “sounds loud”, “smells disgusting”, etc., the activity could have another level of difficulty. To challenge older players users could be asked to place objects along a scale of ‘soft to hard’, ‘smooth to rough’, ‘no smell to stinky’, or ‘sour to sweet’. The sticker book activity could also be made more stimulating and include an activity where the user has to skillfully select items that match a group of items (i.e., only certain objects can fit with a group of objects based on the objects’ characteristics).

I offer these suggestions because I hate to see children turn away from STEM learning-games at a young age. I want their interest in STEM to be doubling from ages 6 to 12, not be disappearing. I can’t blame the girls for their attitudes toward learning apps/systems either. At one point in writing this review I too needed a break from Sid and took up a friend’s offer to play Team Fortress 2 (only to come back to the review after realizing I hadn’t downloaded TF2 yet – yes, I’m still a n00b).

Sure my opinions are subjective, my actions may be harmless, and there are learning apps and systems that I still need to play, but I don’t think that I’m so different from kids; when I lose interest in critiquing an app they probably aren’t that far behind in losing interest in playing it. I fear that if we lose kids’ interest in STEM games/apps at age 6 then there is a good chance we may not get them back. If we’re lucky they’ll continue to play non-learning games and become interested in computer science/engineering because of their innate interest in them (e.g., they wonder how they’re made, they want to make their own apps, they want to mod a game). I may be overreacting and I am usually more optimistic, so, I’ll continue my UI/UX review of Sid Read & Play with hope of improving learning games for players of all ages.

(continued review here)
Does maple syrup smell “yummy”? Do rotten eggs feel “slimy”? Does a beach ball feel “smooth”? I focused a lot of my attention on the I Sense activity because my answer to all of these questions is “yes”. However, when playing I Sense the answers to these questions are “keep on trying”, “that’s not it, try again”, and “nope, try again”.

In I Sense, Sid quizzes the user to pick out an item that matches certain characteristics based on the object’s look, feel, smell, sound, or taste, but there were often correct answers that Sid said were incorrect. For example, in one trial Sid asked “which thing feels smooth?” with choices including tin foil, apple, and ice cubes. If your answer is ice cubes, “that’s not it, try again”, even though ice cubes is a feasible answer – so much so that in other trials ice cubes is the correct answer. See image below for examples.

Other examples of inconsistency and inaccuracy include answers for “smells yummy” being pie and not maple syrup, “sounds crunchy” being an apple and not ice cubes, “tastes salty” being a pickle and not peanuts, and “feels prickly” being a starfish and not a nest. This activity made me feel like I was supposed to read the mind of the designer or programmer and guess how they were feeling about the object. I didn’t understand why some objects were the correct choices and others incorrect.