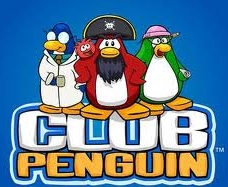 I have been wanting to play a MMORPG, but I have a hard time getting into some of the fantasy elements of WoW. So, I thought I’d ease my way into the genre by starting with an MMO a little more my style – Club Penguin! The penguins are cute and inviting, which is perfect for kids ages 8 to tween, and me. While looks can be deceiving, I felt that my experience was what I expected, both affable and positive.

I have to admit though, I was accidentally playing on servers with “Ultimate safe chat” mode for the majority of my gameplay. I didn’t realize I was playing in this mode until I read the Club Penguin Wikipedia page that stated some servers don’t let users write their own messages. Instead, users communicate through a set menu of salutations, questions, and comments.

When choosing a server I didn’t pay attention to what the chat icon indicated (or maybe I didn’t see it) and figured that the servers with chat icons meant something important about me being able to talk, so I chose servers with the “chat icon”. I imagine kids would be more explorative than me in trying different servers and I would hope that parents would be more attentive to what the icons denote. I was surprised though that there was no hyperlink description to “Ultimate safe chat” in the server selection menu.

If this observation is correct, it makes sense since in the safe mode users may feel more open to chatting via the menu system but don’t use it to have long conversations. In the open mode, some users may be apprehensive to chat out of fear of not knowing what to say, or maybe they just want to read what others say or their friends aren’t around to talk to. I could also foresee users making friends and then having more in depth conversations with them in igloos and not highly populated places.

There is so much to interact and engage with in Club Penguin it’s difficult for me to absorb it all in just one week of gameplay. I tried all 19 mini-games, daily challenges, spy mission, reading stories, collecting coins, and of course throwing snowballs! I did not spend that much time with pets/puffles, finding surprises, or attending events/concerts.

The mini-games in Club Penguin could be another blog post entirely. In summary, there was a diverse set of games. There were games you could play at your own pace (Ice Fishing), sandbox games (DJ3K), classic arcade games (Thin Ice, Astro Barrier), puzzle games (Pufflescape), and fast twitchy games (Puffle Launch, Cart Surfing, Puffle Rescue, Pizzatron 3000). Some games had great in-game tutorials and instructions (Thin Ice, Bean Counters) while other games I struggled to learn how to play or couldn’t find the instructions (Catchin’ Waves and Sled Racing, respectively). The spy mission gameplay also added to the virtual world by providing an adventure game with various short missions to solve.

I gravitated toward playing the mini-games with interactive real-time play against other users. Both Sled Racing and Card-Jitsu offered synchronous play, Card-Jitsu being more popular of the two. I wanted to be where other users were, even if it meant playing a game that I thought was so-so compared to another game that did not have real-time play (I’m sure this observation would mean something in a personality test).

If a spot was empty I (along with others) would leave. I gravitated toward where there were other penguins.
I was most attracted to the synchronous games such as Card-Jitsu, there were always users playing it.

I was also happy to take a break from other penguins and play games alone. I was surprised at the level of challenge in some of the games – at one point in Pufflescape I felt as if I was playing Braid because I was having such a difficult time getting a key. I don’t doubt that a child user would be able to solve the puzzles – the level of gameplay kids are able to achieve at young ages is impressive and I’m glad to see that Disney understands their capabilities and wants.

Genre and style MMORPG (for kids)

Navigation and understanding the layout of the world was easy with the map and teleportation device.

Do players go to the same game or same location at each login? I found my gameplay to be repetitive
as I went to the same games and locations each time. It would be nice if there was more incentive to try
new things. 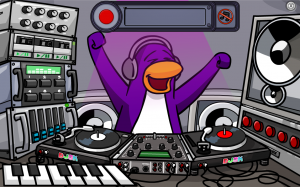 Mini-games such as DJ3K could be modified to include more cooperative gameplay.