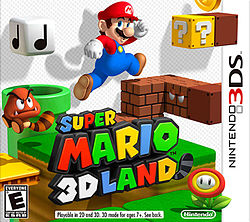 I feel that a Super Mario game is an ambitious first game to review, but I have to pay homage to Shigeru Miyamoto and his team for their abilities to create accessible user experiences.  I appreciate their style of communicating information to the player – it’s simple and effective.  Let me pause here to tell you what I mean by accessible.  I define an accessible game as one that can be learned by a broad population of players (i.e., novice and expert users) because it does not require a certain level of experience or skill to be able to play; all players are able to access and use the information presented in the game.  In other words, a player can do a M-m-m-monster kill regardless of how many n00bs they’ve pwned in the past. I am not implying that the gameplay should be easy, but it should be easy to learn.

Getting back to Super Mario 3D Land, I feel that the game’s designers care about me as a user. They do nice things like put arrows to denote which direction I should go. They include tutorials throughout the gameplay so I don’t have to learn everything at once. The visual and auditory cues are relevant to the gameplay and they call my attention to important things that I would otherwise miss. 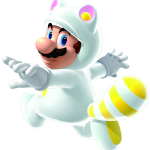 I am biased to liking this game because of the classic side-scroller elements, non-realistic rendering with lots of colors, and cute outfits that have special powers (like the one shown at right). Regardless of these positive elements, I did struggle with some of the gameplay. Mario 3D taught me a lot about how I use frames of reference when playing a video game. Unfortunately, I will have to save an explanation of frames of reference for another post, but I do give an example below.

Platform played on Nintendo 3DS with 3D on the entire time 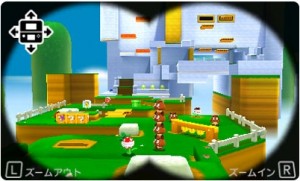 I looked through binoculars to help me navigate 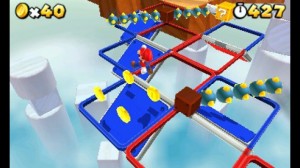 Using shadows and details of scene to help me cross 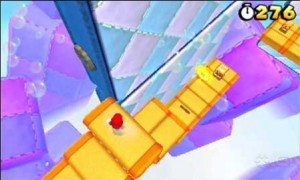