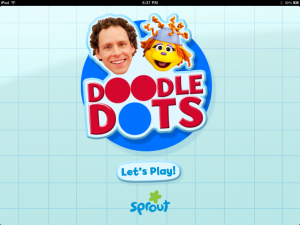 If a police detective is only as good as her informants than a games user researcher is only as good as her play testers (sorry, I just watched an episode of The Wire). In this blog post I introduce my latest play tester, Ashton. Ashton is awesome – and not just because he works for me in exchange for cupcakes. His little hands and eyes pick up on things I would never do, think of, or see. I’ve done 7 or more play test sessions with Ashton, each lasting about 20 minutes and separated a few weeks apart.

For the first 4 sessions Ashton wanted to play Doodle Dots first thing over all other apps, and I thought that was a great compliment from him to the Doodle Dot team. However, his interest faded over time, and I think a large part of that was due to his ability to “game the system” in Doodle Dots. He was no longer challenged in learning the various colors, shapes, fruits, and numbers because he beat the system by learning the pattern of how to complete the dots to draw the picture.

Figure out the starting dot and then complete clockwise pattern to finish drawing.

And because this pattern never changed, Ashton didn’t think there was anything else in the game that he needed to do. So, we moved on to other apps before he had /really/ mastered the content. If you’re wondering, Ashton is 3 years old and Doodle Dots is for 4+, so I don’t think it’s because of his age that he was able to game the Doodle Dot system. 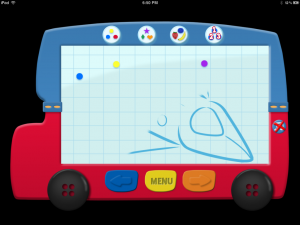 What shape will appear? 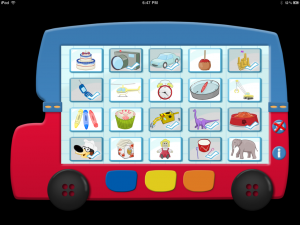 Menu shows objects and completed drawings. Yellow menu button not labeled when menu appears. (So why even have button shapes?)